In this holiday guest post, “Mindful Writer” founder Chris Malcomb shares a lesson in mindful eating from a Thanksgiving retreat. 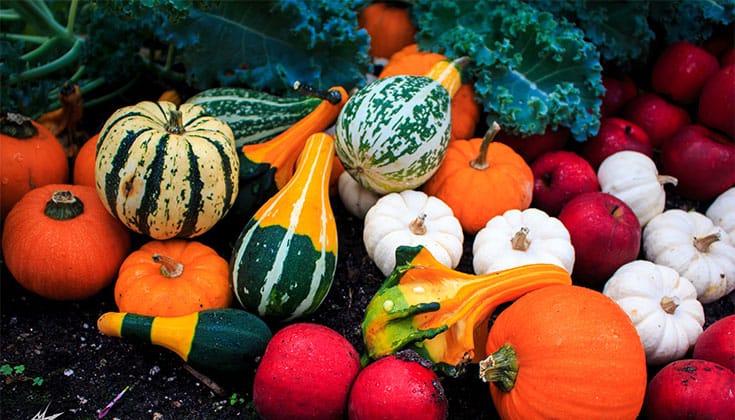 On retreat, we are taught to eat mindfully. We learn to take smaller bites. Set utensils down while chewing. Explore the actual taste and texture of each mouthful. To eat mindfully is to just eat. Not eat and talk. Or eat and read. Or eat and solve all of your problems. Just eat. To the newly initiated, this experience can be frustrating. Hunger demands satiation and the mind floats to thoughts about things around you or judgments of what, or how, you are eating. The dining hall may be silent, but the incessant internal chatter often makes sitting down for a simple meal, well, not so simple.

Yet sticking with mindful eating—repeatedly returning attention to the task at hand—eventually bears fruit. You might notice new or long-forgotten tastes; feel sated on less than usual; or emerge without that familiar post-meal bloat. You might even remember what you ate. On a deeper level, the practice also invites vital inquiries into how your personal “table manner” could, in fact, be a microcosm of your relationship to the entire world.

I learned this firsthand a few years ago while sitting the annual Spirit Rock Thanksgiving Retreat. As is often the case on such retreats, I had eaten well all week: large green salads and homemade dressings; fresh, organic vegetables; sweet potato stews and pans of ginger-baked tofu. Among the myriad physical ailments I encounter on retreat at Spirit Rock—aching limbs and knotted muscles and such—starvation is never a concern. This, of course, makes what I encounter in the dining hall all the more perplexing.

The Thanksgiving buffet table was gorgeous, each dish arranged in an earthen-colored pottery or wooden bowl and surrounded by leaves, pumpkins, candles, and fresh flower bouquets. The aromas of warm spices and wholesome food filled the air as people stood in line, but despite the gratitude I had felt during the welcome blessings, noting my position at the line’s end triggered a fierce resurgence of my most common mealtime thought: Would there be enough for me?

I repeat: I had never gone hungry while on retreat. Still, no sooner had I stepped foot in the dining hall, I found myself silently chastising those who took “excessive” amounts ahead of me, nervously watching a serving dish grow empty, and piling my plate high with more than I could possibly eat. Despite my fears of being shortchanged and undernourished, I would routinely end meals stuffed, scraping uneaten food into the compost bin.

On Thanksgiving Day, my portions were in the hands of the Spirit Rock staff and teachers, which added to my anxiety. Jack Kornfield was my first server, doling out medium-sized portions of mashed potatoes and a cheese-and-nut stuffing (not quite enough, in my opinion, but sufficient), and others followed with a baked vegetable medley, stuffing, and thick brown gravy. Thankfully, I was allowed to serve myself the spinach salad, after which I grabbed the largest onion biscuit I could find and turned to the cranberry sauce.

Cranberry sauce is vital to the Thanksgiving meal. Its tart sweetness balances out the starches and earthy root vegetables, unifying the assorted components like the rhythm section of a blues band. Realizing the importance of getting enough cranberry sauce on my plate the first time through, I scooped up a healthy serving from the large white bowl. When I tipped the serving spoon towards my plate, however, only half of the sauce dislodged. I shook it. No luck. Feeling the pulse of the line behind me, I tapped the spoon on the edge of my plate. Clink, clink. The sauce didn’t budge. My heart started beating nervously. The person behind me leaned closer, and I reluctantly set the half-filled spoon back in the bowl.

I walked to my table with my plate full, but not overflowing. I sat, lifted my fork, and took a deep breath. Be thankful, I thought. Be mindful. Still, I was unable to let go of my cranberry sauce concerns. What if I ran out too soon? How could I eat a Thanksgiving meal with only this much cranberry sauce? I tried to calculate how many bites I would need to make it last the entire meal. I separated a small amount with my fork, combined it with some potato and vegetables, raised it to my mouth, and chewed.

The cranberry sauce was perfect: bitter when my teeth hit the skin of a whole berry; velvety as the insides melted in my mouth. But when I lifted my fork to assemble the next bite, it looked like the pile of sauce had been halved yet again.

There is a story about a young Bosnian War refugee in an orphanage in Eastern Europe. She had lived her life in poverty, and was never certain how much—or even if—she would eat on a given day. During her first weeks in the orphanage, where she was fed three meals daily, the staff observed a curious habit. When the girl received her meal, she cut it into dozens of miniscule pieces, which she spread around her plate. She ate half of the pieces very slowly, with her eyes closed; she wrapped the others into a napkin, which she slipped into her coat pocket. One day, a staff member asked her about her behavior. “The pieces I eat,” she said, “I want to enjoy as much as possible. The pieces I save are in case someone else needs them more than me.”

I looked at the food on my plate. Which parts did I actually need? And what if someone else needed them more? Would I be willing to segment the vegetables, potatoes, walnuts, and biscuits into bite-sized portions, dot each with cranberry sauce, and slide my plate across the table? If so, then why was I so concerned about my precious cranberry sauce? And why was I still glancing over my shoulder at people approaching the buffet table for seconds?

My mind eventually settled. The days of retreat had grounded me enough to return to chewing slowly, savoring the flavors, textures, and changing quality of each mouthful. I put my fork down between bites and soaked in the silence of this unique Thanksgiving, allowing myself to truly feel the gratitude in my heart. I knew that my fears and anxieties would likely return with the next meal, that I might always fear a shortage—of cranberry sauce, or of life itself. But in that moment, like most moments, I was fine. Once my plate was empty, I did go back for seconds. The cranberry sauce and stuffing were gone, but I received more potatoes and vegetables. And when I was done eating, there was no need for the compost bucket. For that I was especially thankful.

The most international universities in the world in 2022

How to Practice Wise Intention

Ask Ethan: Where are we relative to the Big Bang?

Why antimatter violates the fundamental symmetry of physics

Why the future of the world’s largest religion is female

How to Rekindle a Relationship with Your Spouse

Can We Know Others’ Worlds?

How to Feed Your Demons

admin - January 21, 2022 0
Lama Tsultrim Allione teaches you an innovative technique to turn your inner demons into friends. Illustrations by Carole Hénaff. Feeding our demons rather than fighting them...