Home MEDITATION Commentary: Why Buddhists Should Support the Resistance in Myanmar

Derek Pyle shares his thoughts on the ongoing crisis in Myanmar, and why it’s important for the international community to respond. 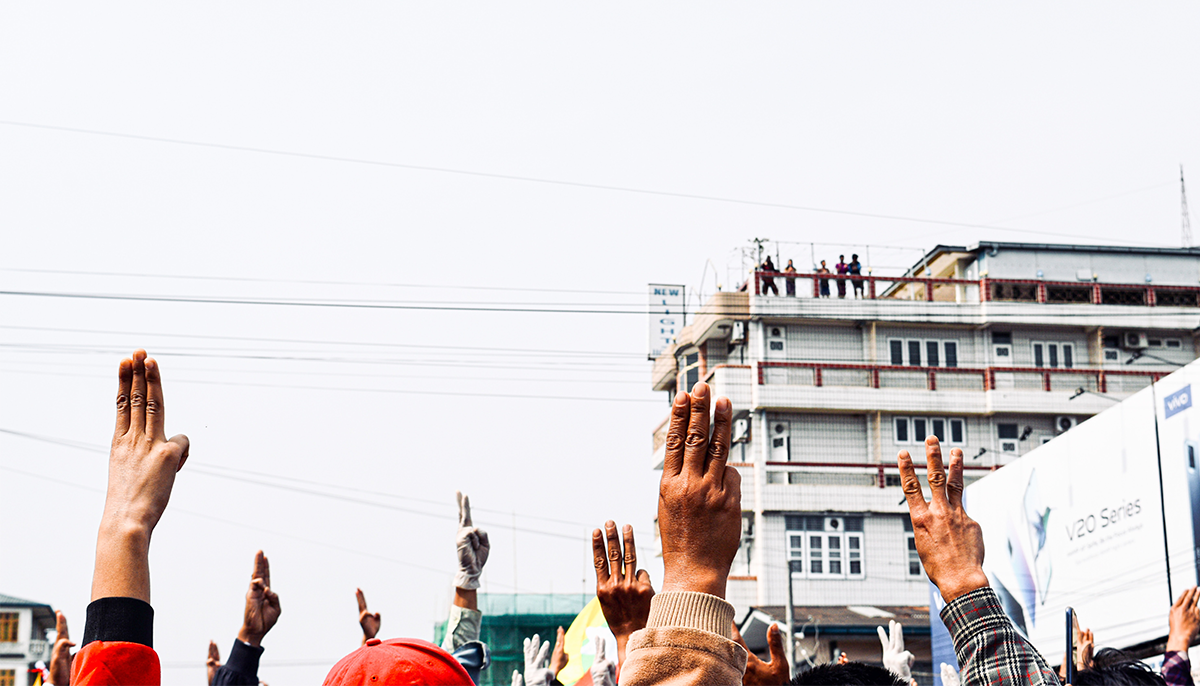 Popularized by Thai protesters in 2014, the three-finger salute has become a prominent symbol against the coup in Myanmar. Photo by Pyae Sone Htun.

Nine months ago, the Burmese military staged a coup in the predominately Buddhist country of Myanmar (formerly known as Burma). The military continues to enact horrendous violence and human rights abuses against the citizens of Myanmar, and many of our fellow practitioners are suffering.

The attempted coup in Myanmar began on February 1, 2021 when the Tatmadaw military detained many of the country’s democratically elected officials. The country responded with a national strike as millions of healthcare workers, civil servants, teachers, truck drivers, and others refused to work. Railways and highways were shut down as part of the Civil Disobedience Movement, and the streets of major cities and small towns flooded with people.

We should see it as our karmic responsibility to support the people suffering in Myanmar.

The military junta responded to this Spring Revolution with extreme violence. State-sanctioned security forces opened fire on unarmed crowds. The military imposed citywide curfews, conducting midnight raids to arrest and disappear dissidents. Since February, the Assistance Association of Political Prisoners has documented over 1,200 deaths and over 9,300 arrests.

As violence intensified, participants in the Spring Revolution took to writing their blood type and personal information on their bodies should they be killed or injured in the streets. The military has also massacred rural villages and continues to use torture and sexual violence as part of their political repression.

Of the 57 million people living in Myanmar, nearly 90% identify as Buddhists. It is because of our interconnectedness with Myanmar that we must support its people in this time of need. Many secular mindfulness practices were shaped by Burmese traditions. Internationally known dharma teachers such as Mahasi Sayadaw, S.N. Goenka, Joseph Goldstein and Sharon Salzberg began as adherents of Burmese Buddhism. The Buddha spoke of the dharma as a priceless gift, and we are indebted to those who have shared it with us.

Buddhists have long played a central role in Myanmar’s struggle against violence and oppression. In the early 20th century, revered monastics including Ledi Sayadaw viewed the dharma as central to resisting British colonial rule. The practice of Vipassana was promoted as a major component of this resistance, which in turn led to its global popularity. Buddhist monastics also played crucial roles in the 1988 Uprising and Saffron Revolution of 2007, which freed Myanmar from its military dictatorship until this year’s attempted coup. The International Network of Engaged Buddhists (INEB) has continued to respond to the current crisis in Myanmar, as detailed in INEB’s publication Seeds of Peace.

This year, Myanmar has continuously appealed to the international community to aid the resistance. In the immediate aftermath of the attempted coup, social media was filled with hashtags supporting the cause such as #SaveMyanmar. There are ongoing calls to sanction the Tatmadaw and boycott the regime’s transnational business partners. As Buddhists, we must support these boycotts and pressure our governments to impose sanctions – not only against the Tatmadaw leaders, but against the companies doing business with them.

We must recognize the legitimacy of Myanmar’s National Unity Government (NUG), which stands in opposition to the Tatmadaw. The NUG is an opposition government compromised of elected officials ousted by the coup working alongside ethnic minority group leaders. The promise of multiethnic leadership is a remarkable feature of the NUG, as ethnic minorities including the Rohingya, Karen, and Kachin have been suffering state-sanctioned violence in Myanmar for decades. International Buddhists supporting multiethnic leadership in Myanmar is an important act of interfaith solidarity.

The United Nations has yet to recognize the NUG as the official representatives of Myanmar, although the Tatmadaw was barred from attending the UN General Assembly this September. Recently, the European Union recognized the NUG as legitimate,, and the Burma Act of 2021 was introduced to the US House of Representatives. These are promising signs, but by and large the international community has failed the people of Myanmar.

Last month, acting NUG President Duwa Lashi La declared a “people’s defensive war” against the military junta. No one wishes to live in a war-torn country, but as the human rights group Progressive Voice explains: “The declaration [of defensive war] is especially understandable because the international response to the attempted coup has been weak, ineffective, uncoordinated, and lacking conviction.”

It is in the absence of international support that the people of Myanmar are forced to consider defensive war. This is the heartbreaking reality. We should see it as our karmic responsibility to support the people suffering there.

Now it is the international Buddhist community’s responsibility to join the resistance:

Read the Lion’s Roar Foundation “Report to Our Community — 2021: The Year in Review”

Modern Stoicism for all, from Christians to atheists

The Dharma of Distraction – Lion’s Roar

‘Oumuamua wasn’t an alien spacecraft, but a nitrogen iceberg

3 Ways How Entrepreneurs Can Capitalize On The Pandemic Boom

A Powerful Method for Increasing Productivity