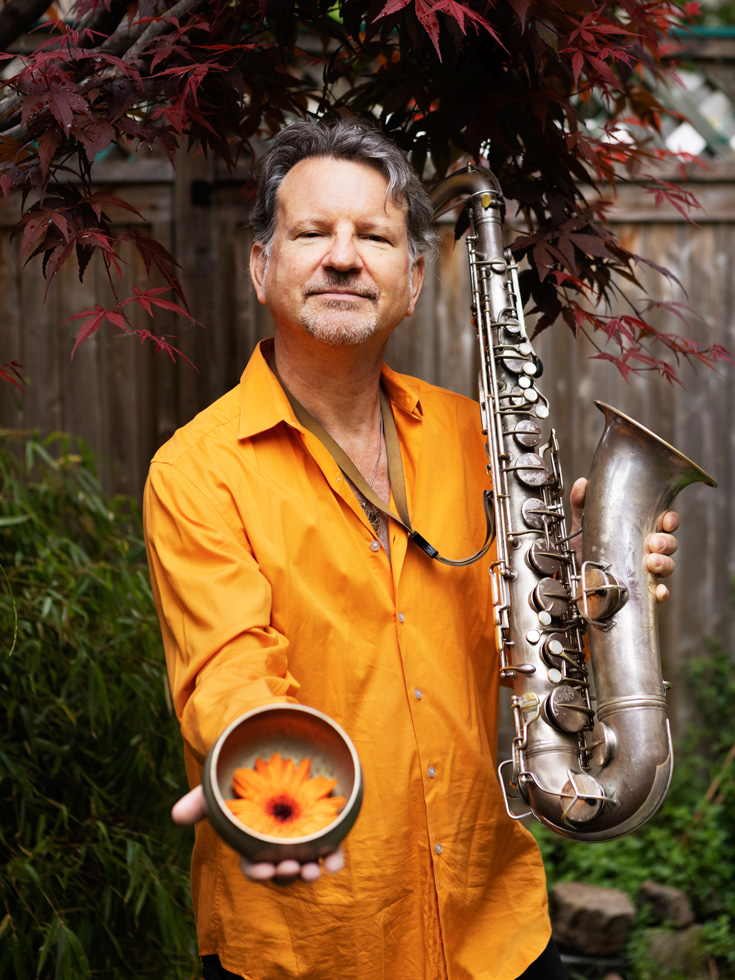 In the spring of 2020, as the grave reality of the Covid-19 pandemic became clear to many in North America, jazz saxophonist Jeff Lederer found himself suddenly groundless. With gigs cancelled, teaching work hastily moved online, and no sense of when any of it would feel familiar again, he went to the place he always goes to work things out: The Snake House. Lederer turns to this small shack outside of his family’s home in rural southern Vermont (that got its name for sheltering a small garter snake), whether he’s deepening his saxophone practice or composing new music. I interviewed him there about his new album, Eighfold Path, inspired by a copy of Thich Nhat Hanh’s book The Heart of the Buddha’s Teaching, which just happened to be lying on the bookshelf inside when I arrived.

Alex W. Rodríguez: I’d like to learn more about the Buddhism in your Jazz. Can you give me a sense of what someone who might be less familiar with the ins and outs of a jazz quartet would be able to listen into from their practice on the cushion?

Jeff Lederer: This is my first interview talking about this album. I’m usually really comfortable talking about my music, but I’m coming into this one with a little bit of fear because there’s a lot of dilettantism that goes around the world of Buddhism. I think a lot of people encounter Buddhism in different ways. There are as many ways to encounter it as there are different people. I come at from the place of somebody who has a history of exploring different spiritual traditions, which comes from my own interests and being a comparative religion major in college at Oberlin. I explored a lot of different ideas and always found them really fascinating. I’ve also found some really meaningful ways for me to connect my music to those spiritual traditions.

When I’m playing, I try to get into the head space of the sound. I’m hearing it, I’m producing it, and I’m hearing it back, but I’m not evaluating it.

There can be a real dilettantism about approaching different spiritual traditions, but for me, honestly, I come at all of them from a point of curiosity. There are things about Buddhism that guided this project that are really meaningful to me and have helped me a lot over the past two years. I think a lot of people these days are saying something similar, because we’ve all reached for something. My way of thinking about the Eightfold Path was that it was very clear how I could apply that on a daily basis in a lot of different aspects of my life, including music-making. It spoke to me in certain ways.

It seems to me that would be the perfect place to meet your existing practice as a musician. There’s lots of ways to relate to the Eightfold Path as an ongoing routine approach to things, which is also what we’re doing as jazz musicians, right? We’re putting in the time on a daily basis, cultivating a relationship with our instrument, the music, the lineage, and the tradition. All of that same stuff is happening. It seems like there’s a powerful confluence happening here. What was it like to integrate the knowledge from your study of this book into an existing practice you already have? 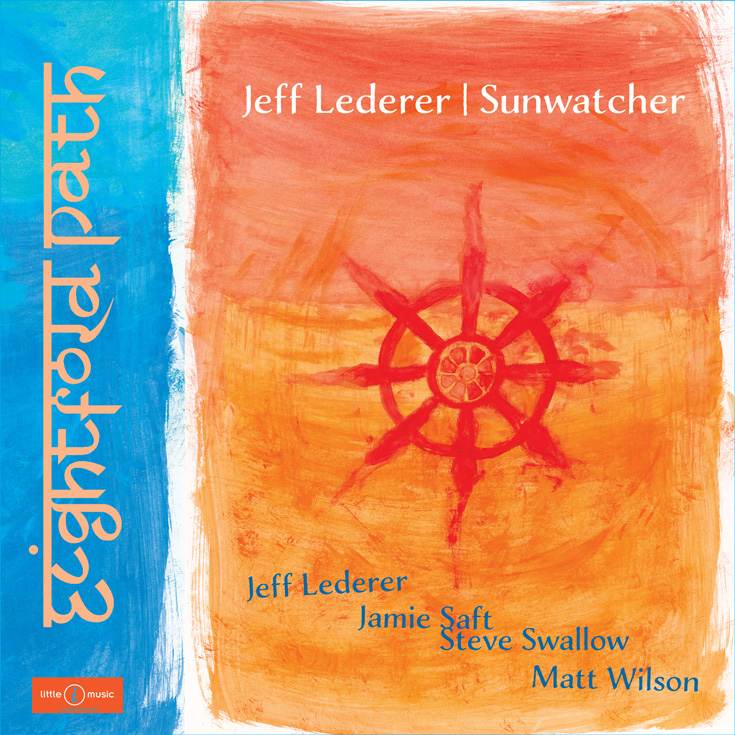 Obviously there’s a long history of musicians that have explored this path before me. As a matter of fact, the bassist on the first Sunwatcher Quartet record is Buster Williams, who clearly has a longstanding Buddhist practice. I never talked to Buster that much about it, but there’s certainly something in his sound.

We often use the phrase “in the moment” in jazz. It was just amazing how much Buster was in the moment. I was a little intimidated by playing with him, but whatever direction I went, Buster would go — which was very much “in the moment.” I don’t know if that’s directly attributable to his outlook, but his outlook on music seems to bear the fruits of his own personal practice — his meditation practice.

I want to explore the connections with improvised music more. There’s a lot of stuff going on in folks’ heads, and then you tell them “Okay, now is that moment when we’re doing this for real and improvising.” The phrase that everyone says based on a Charlie Parker quote. [Note: This possibly apocryphal quote is usually a variation on “First, learn your instrument. Then, forget everything and just play.”] Like, “forget all that stuff.” But it’s really not “forget about it” — it’s really more putting the mindset into that moment and freeing yourself from all the other things that are weighing down on you. They’re still there — you still know what a C minor seven is, you know what a C pentatonic scale is — but what I would like to be able to help students do is to be in that moment with all that stuff and get to a moment of freeing yourself from it. That’s the moment that reminded me of what I read in Thich Nhat Hanh’s book about Right Mindfulness.

What you’re describing is something that would be very familiar to any mindfulness teacher, or anyone familiar with the Buddhist tradition. That’s what we’re training our mind to do in a very similar way. And the practice we do as musicians is the same sort of practice we do on the cushion.

What was it like to do the work that you do — that daily grind work of being a composer-improviser — in the space of the pandemic? How did you start to bring what you were learning from Thich Nhat Hanh into your practice?

Yeah, for sure. I do love the word “practice.” Especially if we shift the idea from this terrible thing of “Oh, I’ve got to practice,” to saying, “I’m a musician, this is my practice.” In other words: “This is what I do.” When I’m in The Snake House, especially up here in Vermont, I can really get in my zone better than anywhere else. The first thing that started was my practice of long tones and overtones, which any musician does — any saxophone player stretches overtone series extensively just to develop a good shape. Thich Nhat Hanh’s book was really in my mind at the time. I shifted my own perception of what I was doing with long tones to feel that not only am I the producer of the sound, but I’m also observing the sound and hearing the sound. I’m the listener to the sound. That’s all happening at the same time.

I did this without judgment, because it’s very easy to go into self-evaluation. Most Western classical music teachers will train you to evaluate yourself constantly. How is your pitch? How is your tone? It was really important for me to get into a practice where I started my day with long tones, but felt non-evaluative and being a kind of an observer as well as the producer. It’s a parallel to what I understand about the first steps towards mindfulness. We’re not trying to eliminate the thoughts running in our head, but rather observe them, and notice what’s happening in our minds and in our bodies. That’s the first step to having a healthy relationship with it. It’s the same way with playing single tones on the saxophone.

When I’m playing, I try to get into the head space of the sound. I’m hearing it, I’m producing it, and I’m hearing it back, but I’m not evaluating it. It’s a step towards taking a little bit of the ego out of the process. And by ego, I don’t mean “I can do this and that really well.” I mean that sense of self — connecting that a little bit more with the world. As my note goes out against the trees, the trees are send it back to me. It’s not necessarily just me. That sound becomes joined with the world.

Intention: One Simple Practice that Changes Everything

3 New Tech Innovations That Will Blow Your Mind

Do the laws of physics and neuroscience disprove free will?

Seven People at Your Thanksgiving Table

How stoicism can inspire fearless leadership

When meeting someone new, skip the small talk

admin - September 1, 2021 0
The new project will provide financial stipends for Black and Brown Buddhist leaders, as well as resources and support for Buddhist groups in North...