Home MEDITATION She Who Hears the Cries of Marines

As ex-Marine Alex Kakuyo laments a war he can no longer believe in, he turns for help to the bodhisattva Kannon and the buddha Amida. 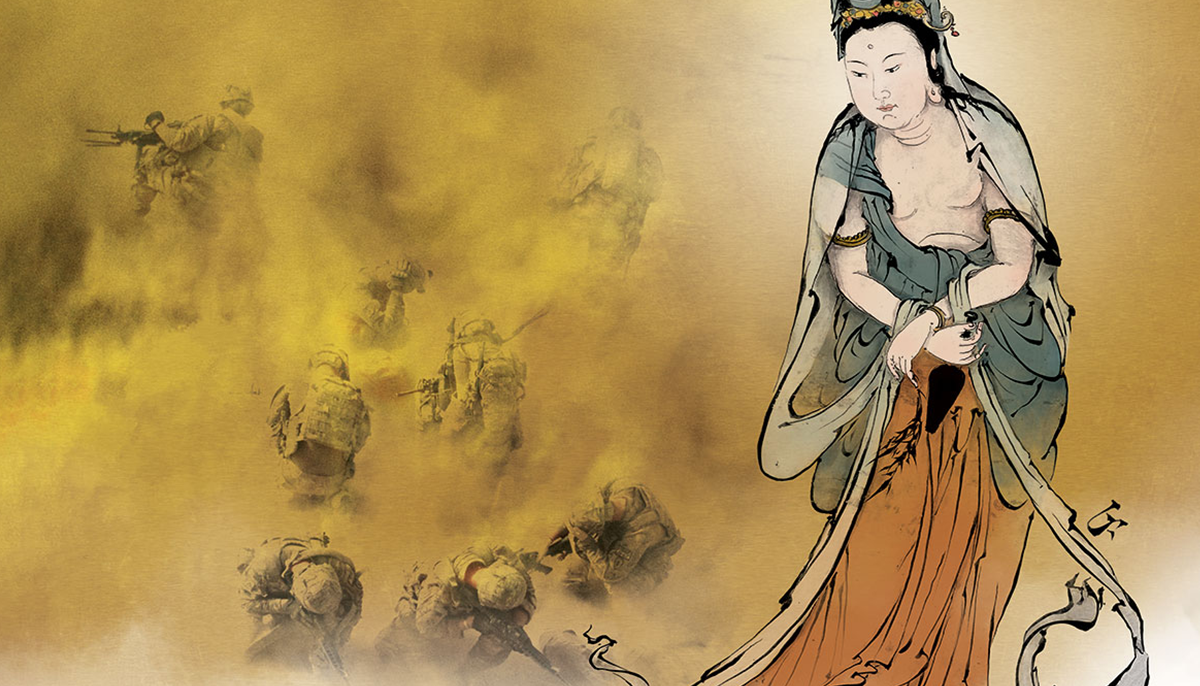 In 2010, I led a Marine fire team in Afghanistan. The men and women I served with were smart, strong, and capable in ways I’ll never measure up to. They endured cold, hunger, and the threat of death because they felt they were making the world a better place.

I had to believe it. There’s no way I could have survived over there if I didn’t.

Now American troops have been withdrawn from Afghanistan, the war is over, and the belief I’ve carried with me for the past eleven years—that my work in Afghanistan mattered—is broken. And I don’t know what to do about it.

Is Afghanistan a better place because of my service? Is the world better? I don’t know, but it seems like after twenty years, two trillion dollars, and twenty-five hundred dead service members, everything is back at square one.

I have many painful emotions around what’s happened, mainly sadness and confusion. I also have some thoughts on how Buddhism is helping me cope with them.

One common misconception about the buddhadharma is that it has no theology of lament. People see images of smiling monks and assume that even in the worst of times we aren’t allowed to grieve, to cry, to mourn. Thus, Buddhist practice is reduced to either toxic positivity or a neutered stoicism.

But how could a religion whose first noble truth states, “Life is suffering,” not make room for grief? What good is a spirituality that abandons us in our darkest hours?

The truth is that Buddhism has a rich theology of lamentation. Yes, we are taught to accept suffering as part of life. But when our suffering becomes too much to bear, when the burden seems too heavy to carry, the dharma can help us in our time of need.

An example of this can be seen in Kannon, the Bodhisattva of Compassion. Buddhist theologians call her “She who hears the cries of the world.” In the Lotus Sutra, Kannon takes on a variety of forms (man, woman, king, pauper, etc.) to help people cope with suffering.

Her transformation powers are impressive, but what interests me most about Kannon is the way she chooses to help. In a world where permanently distracted people don’t acknowledge each other’s presence, Kannon sees us. She acknowledges and validates our pain. In this way, she reminds me of my mother.

As a child, I was both adventurous and clumsy, a dangerous combination that left my body covered in scars from my misadventures. One day, I was playing on the monkey bars in the park when I fell and hit my head on the pavement.
By the time I ran home to my mom and told her what happened, there was a golf ball sized knot on my forehead. My mom wrapped me in her arms and held me until I stopped crying, and then kissed my forehead to “make it better.”
I doubt there is a scientific explanation why a hug and kiss from mom makes it all better, but it does. I remember that my head didn’t stop hurting, but receiving that attention from my mom made everything okay.

For Buddhists, Kannon is a mother, tending her wounded children. She’s our shoulder to cry on, the keeper of our secrets, and the willing recipient of our grief.

Another figure in Buddhism’s theology of lament is Amida, the Buddha of Infinite Light. We know from the Pure Land sutras that Amida started life as a monk named Dharmakara. In response to the suffering of the world, Dharmakara spent countless eons practicing austerities until he developed miraculous powers. Then he used those powers to create a land of ultimate bliss, promising that anyone who had faith in him could go there.

The most common way for practitioners to express this faith is through the chant “Namu Amida Butsu,” which means, “I take refuge in Amida Buddha.” Most often, this chant is seen as an expression of gratitude for both the simple pleasures of life—hot coffee, good food, comfy beds, etc.—and the salvation that awaits us in Amida’s pure land.
However, there is another, deeper meaning to the teaching. Rev. Soga Ryojin, a Pure Land Buddhist minister, taught that Dharmakara is the embodiment of the storehouse consciousness, the source of the buddhanature that resides in all sentient beings.

So when we take refuge in Amida, we’re taking refuge in the enlightened part of ourselves. When we understand this, the nembutsu chant is more than a simple act of gratitude. It’s a reminder that in our darkest moments there’s still goodness in the world, even if we can’t see it.

Under ideal circumstances, we’d look out our windows and see nothing but the pure land. We’d look at each other, and see nothing but buddhas. But there are times in life when the enlightened nature of this world is covered over with defilements, when greed, anger, and ignorance block out the truth and goodness of society.
In these moments, Amida steps in like a loving father, guiding us toward the light within ourselves, showing us the beauty that lives in the world.

In these difficult times, I lean more heavily on Kannon and Amida with every moment.

In times of sadness, I kneel in front of my altar and chant, “Kanzeon Namu Butsu,” asking Kannon to hear my cries and hold me in my grief. In times of anger, I chant, “Namu Amida Butsu,” asking Amida to show me the beauty within all of this misery.

And in every moment in between, I grieve, I cry, and I mourn the rank unfairness of it all.

There’s so much unhappiness in the world, and there’s nothing I can do.

So I kneel before my altar and lament.

This Very Mind Is Buddha

This bird-like drone can perch on branches, catch objects

Are CBD creams one of the best treatments for muscle pain?

Out of Africa: Not just once, but many times

admin - February 20, 2022 0
We call people who harm us enemies, but is that who they really are? When we see the person behind the label, say Buddhist...