Home MEDITATION Show Up In a Good Way

For Zen priest Ben Connelly, joining with Indigenous communities to oppose the Line 3 pipeline gets to the heart of his practice. But to do that, he can no longer ignore how he has benefited from an unjust society. 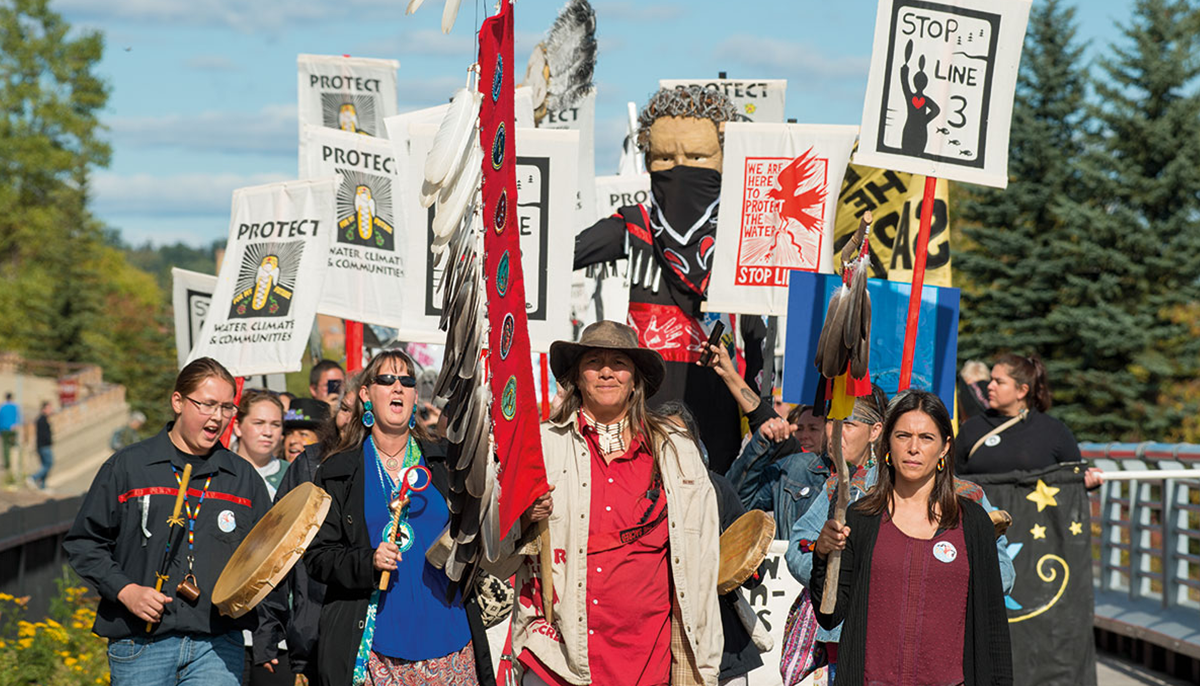 Although the company says the pipeline is “substantially complete” and oil has begun to flow, significant construction remains and political opposition and legal challenges continue. Photo by Fibonacci Blue

“I hope you will show up in a good way,” said Ojibwe great-grandmother Mary Lyons.

Resplendent in a brightly colored long skirt, she was flanked by her daughters and granddaughters. Behind them lay a glittering lake, towering trees, and representatives of a half dozen religious traditions bearing signs that read “Stop Line 3.”

Lyons dropped laughs about herself and her family into breaks in her unflinching talk on the living legacy of violence that the land and her people had suffered at the hands of settlers and their descendants, white folks like me. Standing behind her in the robes of a Zen priest, I felt both the warmth of her heart and her fierce challenge to my place in ongoing oppression.

Looking directly at how we ignore harmful patterns is a central element of Buddhist practice.

As the prayer circle concluded, an Indigenous woman all in red grabbed the mic and gave a blunt exhortation for us all to enter the nonviolent direct action that lay ahead with courage and fire. I took a breath and recalled my vows to embody liberation for all beings. To meet the suffering and violence of samsara with what Sanskrit texts call ahimsa, nonviolence. To meet with my whole being whatever the police, with funding from the pipeline company Enbridge, would bring.

The Line 3 pipeline is being built by Enbridge to carry tar sands oil from Canada into the US. The proposed route passes through treaty-protected Anishinaabe lands in northern Minnesota, including sacred wild rice beds. It crosses many rivers and in two places passes under the Mississippi. Pipelines leak and spill, sex trafficking of Indigenous women often follows fossil fuel projects, and there is consensus among climate change experts that new fossil fuel infrastructure is counterproductive.

Indigenous leaders have been working to stop the construction of Line 3 for years, and many veterans of the powerful resistance to the Dakota pipeline at Standing Rock have brought their energy to Minnesota. These movements work: after ten years of dogged resistance, the Keystone XL pipeline was scrapped in June, 2021.

As a Buddhist priest, I am trained to focus on practice. Practice here has two senses—to practice is to do, and what we practice is what we get good at. In every moment, we practice actions of body, thought, perception, and emotion, and these create our life. This is a simple way to think of karma, and as a student of Yogacara Buddhism, I understand that our karma is collective, for all things are of dependent nature. What we each practice affects all.

Listening to Indigenous elders, I often hear them say, “Show up in a good way,” and “We are all relations.” I believe that the way to embody the vow to live for the liberation of all beings is to recognize that everything is my family and to practice the best I can.

Last year I sat around a campfire with a diverse group of religious leaders called to Anishinaabe land by Indigenous activist Winona LaDuke to create a vision for stopping Line 3. Winona gave no time for othering and blaming. Whenever the conversation drifted to complaining about Enbridge, the government, or police, Winona would fiercely call us back to our practice: how will we show up to protect the waters in a powerful, prayerful way?

Ignorance, along with desire and aversion, drives the wheel of suffering. As a white man, I am part of years of practicing ignoring, or ignorance of, the violence and oppression that provide me with safety, convenience, and wealth. The history I was taught, the unpolluted neighborhoods I lived in, access to good food, clean water, education, lack of police harassment—these all create my experience of the world. But if I do not practice ignoring, it is quite plain that benefits come to me through systems that harm animals, plants, ecosystems, and people who are less privileged than me. 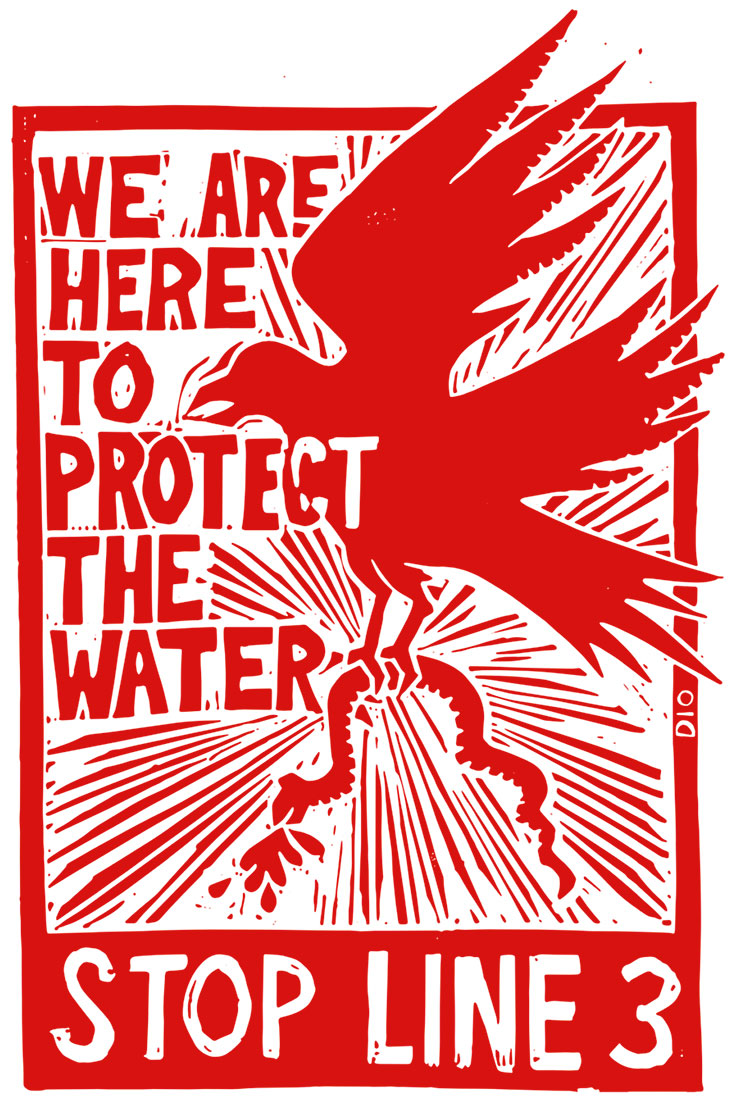 Looking directly at how we ignore harmful patterns is a central element of Buddhist practice. It is the practice of clear seeing that opens us to intimacy with reality, to our interdependence. Even if it is hard sometimes, seeing reality is liberation. When I follow the lead of folks from communities that are harmed by my privilege, it cracks my ignorance, I see more clearly, and we get more free.

So in June of this year, a thousand of us, including many Buddhists, marched down the highway in blazing heat, following the drums of Indigenous elders, singing and bearing banners that read, “We are here to protect the water.” Famous people came to speak. Though we had prepared for arrest, only a handful of police came and they only observed.

There was an atmosphere of prayer and determination. A few miles away, in a related action, our colleagues occupied a pipeline pump station. A Customs and Border Protection helicopter came and used an intimidation technique they use on migrants at the Mexican border—hovering low above the protestors they raised a hurricane of dirt and gravel that tore at their eyes amid the terrifying fury of the rotors. But the protesters stood fast, and about two hundred were eventually arrested.

Back on the highway, we sang as a contingent of our group walked out into the floodplain where the drill is scheduled to drive line 3 under the pristine Mississippi river. Directly atop the drilling site, they made an encampment to hold a four-day Indigenous ceremony. Although the Anishinaabe have clear treaty rights to use these public lands for ceremony, fishing, and gathering, after seven days the police came and evicted them to make way for Enbridge.

There are now camps all over northern Minnesota where folks are working to Stop Line 3. I hope we may learn from our Indigenous elders that we are all kin, and find ways to show up, in a good way.

Saint Patrick: The Amazing Impact of One Believer

A guide to mobile learning strategies and trends

What Stories Do We Allow Ourselves to Hear?

admin - December 18, 2021 0
When we read fantastical stories in Buddhist texts, we might simply dismiss them as myth. Ralph H. Craig III invites us to look at...