Home SUCCESS Why so many people work “bullshit jobs” 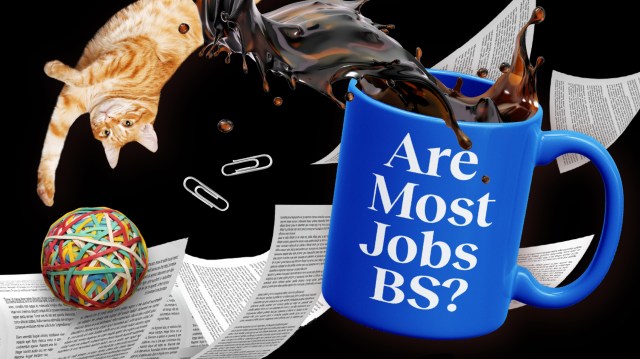 JAMES SUZMAN: Well, let me talk about why we have bullshit jobs. We have this extraordinary

fixation with work and yet with every technological revolution we’ve had, more people have gone out of work, and we’ve been very resourceful and very creative in terms of creating jobs and things for them to do. Most of us work in this great amorphous blob of a thing called the services sector. Within that services sector space, there’s an awful lot of work which I think is work we’ve simply created because we feel that humans cannot live without organized work, and also ’cause we organize our societies on that basis.

Certainly now in these societies based on fossil fuels and ever more productive machines, there actually isn’t a lot of very good work for everybody to do, yet we insist on full employment, and it is a product of the fact that we are doing work just for work’s sake. And these jobs are fundamentally, in many senses, bullshit.

Ever since people first worked out how to convert energy stored in fossil fuels into work, putting it through machines that translate that steam into turning engines and turbines, they have imagined a world in which technology, in which external energy use spares us from future labor.

From Benjamin Franklin all the way through to the early 20th century, thinkers and dreamers alike all articulated visions of this kind of post-work world, but nobody did this better than John Maynard Keynes. He was, of course, the man who transformed economics. And in 1930, John Maynard Keynes wrote an essay called the “Economic Possibilities for our Grandchildren”. And in that essay, he decided to take wings into the future, to go out of miseries of this depression that everybody was enduring and imagine what the economic world would look like 100 years in the future. In this essay, he famously predicted that by 2030, by more or less now, we’d be working no more than 15 hours in a week. Why would we do this? He said that based on

calculations of productivity and capital growth and technological advancements, he believed that we would have come to an economic utopia, where everybody’s basic needs would be very easily met.

The societies that developed agriculture became considerably more productive than the societies that were still living a life of foraging. And as a result of that, we evolved, we became hardwired to have this infinite need. Having enough food today was simply a trigger to worry about having more for tomorrow, so we became accumulators, surplus creators. In other words, because it was evolutionary advantageous, we developed infinite needs. There’s no debating the fact that this extraordinary work ethic that was instilled into us has brought us unbelievable benefits.

We’re now at a point in human history where we have an economy where we are so productive, we’ve conquered scarcity. More food goes into landfill than in our bellies every year. We are living in an era of untold affluence, yet very strangely we continue to organize our economies as if we’re farmers risking going hungry. So is it a question of culture? Is the reason that we continue to work as we do simply because we’ve hung onto culture, and we’ve all bound into

When Keynes predicted the economic utopia that he imagined, he argued that there was only one real obstacle to achieving that, and he described that as our instinct to work, our instinct that had been forged at the fires of evolution. But there’s a real concern that the very medicine that brought us this extraordinary prosperity is now likely to make the patient sick. It could well be that Keynes would look at us now and say, “Take it easy, chaps.” This is part of the

process towards change. So we have these vast convoluted processes of people doing bullshit jobs of incredible complexity, but for no apparent purpose.

There is a definite appetite for doing things differently, for experimenting. Suddenly now in the United States, only 50% of people polled are interested in something like universal basic income, and recognize that there is a certain hollowness to the narrative behind the American dream quite simply because the economy is not organized in those terms anymore. If everybody’s basic needs are met, which was the Keynesian dream in terms of his economic utopia, how might that affect our behavior in other ways?

As we all learnt in lockdown in our confinement, we became an amateur artist, we became amateur cooks, we became amateur bakers. We are a species that likes to do work, and I can imagine a world where we might end up all doing the work we love instead of doing some crappy job that we don’t want to do. And a world in which everybody did what they want would be a world that is much richer and much more productive in the things that actually

matter to most people.

NARRATOR: Get smarter faster every week with new videos from the world’s biggest thinkers.

Where The Magic Happens

How the best alternative to “quantum spookiness” failed

Why and How Is Mindfulness Meditation Good for Your Health

Where to get Business Consultancy Advice – Life Coaches Blog

The greatest threat to humanity?

admin - March 6, 2022 0
BRYAN WALSH: A little more than 200 years ago the world experienced something that's on the edge I would say, existential threat, and...