Home SUCCESS 3D-printed, laser-cooked meat may be the future of cooking 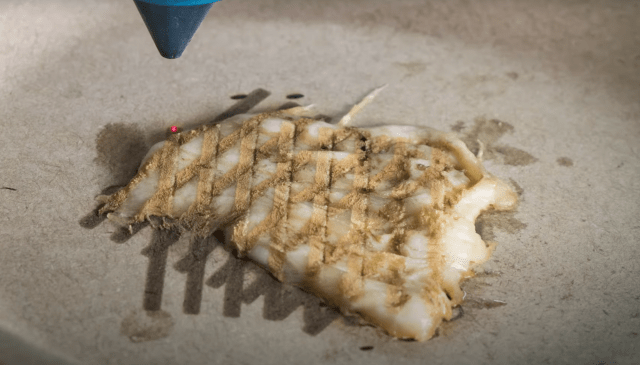 The next major innovation in home cooking could be a device that 3D-prints meat and cooks it with ultra-precise lasers.

That is the long-term vision at Columbia University’s Creative Machines Lab, an engineering group that uses insight from biology to research and develop autonomous systems that “create and are creative.” The engineers have spent years working to digitize and automate the cooking process.

In 2005, the team began developing the first open-source 3D printer capable of producing multilayered food. Dubbed the Fab@Home, the device printed foods that were easy to blend up and fit through a printing nozzle: cheese, chocolate, and cookie dough. Later versions of the system enabled printing food in more complex shapes — a spaceship, wild coils of candy, and custom pasta shapes — as well as printing larger food items, like a hamburger.

Now, the team is focusing on the cooking process. In a study published in npj Science of Food, engineers with the Creative Machines Lab described experiments they conducted on cooking 3D-printed meat with lasers. The results showed that, compared to oven-broiled meat, the laser-cooked meat shrank less, retained double the moisture, and was even rated as better tasting by two blind taste-testers.

There are three ways to cook meat: convection, conduction, and radiation. A laser cooking system heats food with radiation, like the microwave. In experimental settings, lasers have already been used to cook food, but it has been difficult for researchers to precisely control the lasers to cook the food evenly and to optimal temperatures.

The recent study aimed to solve the precision problem with software. First, the researchers blended raw chicken (with the tendons removed) in a food processor, inserted it into syringes, and printed thin, multilayered pieces of chicken.

The team then exposed the cutlet-sized chicken shapes to three types of lasers: a blue laser, a near-infrared laser, and a mid-infrared laser. These three types of laser operated at different wavelengths, but all the laser beams were only millimeters in diameter, enabling precise delivery of radiation. To optimize cooking, the team used software to emit radiation in different patterns.

“We use the cooking pattern that can be easily adjusted to optimize the heating conditions for chicken,” Columbia Engineering noted in a video detailing the experiments. “By tuning parameters such as circle diameter, circle density, path length, randomness, and laser speed, we can optimize the distribution of energy that hits the surface of the food with higher resolution than conventional heating methods.”

Most of these heating patterns are not possible with other cooking methods. For example, the team can program the lasers to cook meat in checkerboard, lace, or even artistic floral patterns. Not all of the patterns are for optimizing heat distribution; some simply enable “aesthetic expression on cooked food,” the study noted.

The results showed that different lasers are better suited for different aspects of the cooking process. Blue lasers worked better for cooking the inside of the chicken, while the infrared lasers were more effective at browning the surface of the chicken — a process that alters the flavor of meat through the Maillard reaction.

What’s more, the near-infrared laser was able to brown chicken through sealed plastic, suggesting that future devices could cook meat in its original packaging.

“Cooking foods that are hermetically sealed could significantly increase their shelf life by reducing their microbial contamination and has great commercial applications for packaged to-go meals at the grocery store,” the study noted.

The future of laser cooking devices

The technology for printing food and cooking it with lasers exists today, but not within a single appliance. One hurdle in developing such an appliance for consumers, beyond affordability and scalability, is designing one that is as simple to use as common devices, like a microwave or air fryer.

Another hurdle is customizability. The Creative Machines Lab envisions a future where people can not only print and laser cook dishes with the touch of a button, but also use software to create and share novel recipes — perhaps ones that are impossible or impractical with conventional cooking techniques. That will require computer-aided design — a sort of Photoshop for home cooking, in other words.

Until then, the recent study serves as one of the major first steps toward the digitization of cooking.
“Software cooking is a relatively uncharted space and multiwavelength cooking boasts interesting opportunities for tailored meal creation and can be extended to other animal proteins or food groups,” the study concluded.

We froze insects to learn how they remember their way home

Terraforming: why the Moon is a better target than Mars

How to Build Connections and Create Boundless Opportunities

10% of people are dominating social media. What if the other...

admin - April 15, 2022 0
TODD ROSE: Technology allows a scale and speed of opinion creation that is extremely seductive to our brain. Social media is the great...