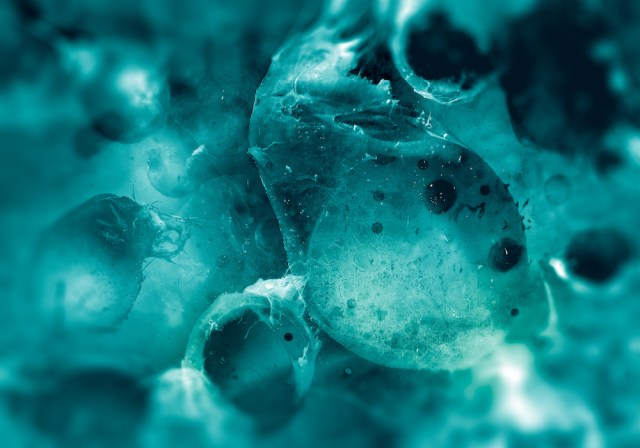 A photographer composes his scene from a few key elements. A light source produces rays or waves, which are transmitted to the camera, patterned by their interactions with the objects in the frame. The photographer captures a small fraction of this light and deposits it on the film or digital chip inside his camera. The capability of the light source and the quality of the film determine which scenes can be recorded.

Pictures and movies made with X-rays operate under precisely the same principles. Considerable scientific work has been devoted to generating X-rays and creating invisible X-ray light sources. X-ray cameras are an area of ongoing research as well. The technological limits of these devices dictate the possibilities for X-ray photos and movies.

A recent study published in Advanced Functional Materials demonstrates a new type of X-ray film that could someday enable X-ray microscopes and movies of living cells.

X-rays pass through matter like colored glass, depending on their energy

X-rays come in a spectrum — just like the optical light spectrum (red, orange, yellow) — that our eyes see. In fact, these are two different portions of the exact same larger electromagnetic wave spectrum. Waves of higher frequency — and thus higher energy — than visible light are classified as ultraviolet (UV) light. UV produces sunburns on human skin, and has been a topic of public interest under recent circumstances for sterilizing surfaces. As the energy of a light wave becomes higher, it transitions from the UV portion of the electromagnetic spectrum to the X-ray portion, with roughly 100 to 100,000 times the energy of a visible ray.

If you picture the energy spectrum of X-rays as a range of colors, then matter is like colored glass: Objects of varying density and thickness transmit different X-ray colors. An X-ray can penetrate several inches of dense matter, if its energy is just right. This transmission allows us to photograph the inside of a visually opaque object.

But simply seeing some light is not enough. A photograph or video needs contrast; the scene must vary between dark and light. To achieve high contrast in an X-ray image, the different components of the scene must block or transmit a widely varying fraction of the illuminating X-rays. Adjusting the light source and camera to a higher (hard) or lower (soft) energy spectrum can achieve this effect.

By picking the proper X-ray energies to optimize transmission and contrast, we can take images of all sorts of things. Generally, hard X-rays can image extremely dense or thick objects, while soft X-rays can image thin or low-density materials. Airport scanners use hard X-rays to look for metal in bulging suitcases. Different atoms and molecules pass X-rays somewhat differently, too. Medical X-rays use moderately hard X-ray energies to penetrate skin, bones, and teeth.

At a specific and very soft energy range, called the “water window,” water is highly transparent, but miniscule amounts of carbon-based living matter strongly absorb X-rays. This effect can be harnessed to produce a high contrast image of living tissue in suspension. Dark cells are superimposed on their bright water medium.

To take advantage of the water window, we need both a source and a camera that work at these very soft energies. We have soft X-ray light sources. We also have many types of X-ray detection devices, often called detectors or sensors. You can think of these as being the film in a traditional camera, or the CCD chip in a digital camera: They absorb light and produce an image or electrical signal.

But for soft X-rays, we’ve lacked an ideal film to capture high-speed movies. Soft X-ray cameras generally use a scintillator: a material that transmutes the invisible rays into visible rays that can be captured with an ordinary camera. Scintillators have major drawbacks when compared to directly detecting X-rays. They are inefficient, losing light and distorting the X-ray image. They also glow for some time after detecting X-rays, so that consecutive images will overlay and blur together. These and other limitations have made water-window X-ray video cameras impractical. That’s where the new research comes in.

The new X-ray detector solves these issues of speed, sensitivity, and energy spectrum. Its film is a single crystal layer of tin monosulfide (SnS) only 100 atoms across. When X-rays strike the tiny SnS sheet, they directly kick out a stream of electrons. This current is read out with electronic circuits. The SnS sensor can react in less than 10 milliseconds, allowing hundreds of pictures to be taken in one second. Finally, it is extremely sensitive, but only to the soft X-rays that can image living cells.

Building a camera from SnS sensors is clear in concept. Each sensor could act as one dot (pixel) in a larger image. Arraying many pixel sensors together and taking hundreds of readouts of each pixel every second could create a motion picture. Under the illumination of a continuous soft X-ray source, an SnS camera could take real-time video. If it could be developed and wired correctly, the frame rate might be high enough for high speed, or “slo-mo,” films, too.

A particularly exciting use for an SnS camera is a microscope that works just like a traditional optical microscope, but magnifies the X-ray picture of a tiny living sample under continuous motion. This X-ray microscope could see through tissue and also achieve higher magnification than an optical microscope, due to the smaller wavelength of X-ray light. Such an instrument could turn this research advance into a breakthrough technology for medical and biological science.

7 Best Ways How to Make Your Coffee Healthier

Maybe Ukraine should claim some of Russia’s land, instead

How psychiatric ideas about trauma evolved after World War I

How to Incorporate the Vision of Others for Business Success