Ephrat Livni reflects on years of spiritual study with the moon as her guide. 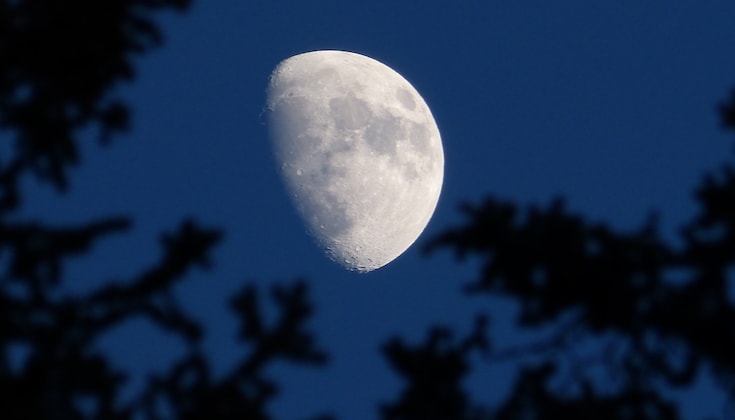 If you’re in search of a guru, the moon is taking students. She’s a subtle, powerful teacher, with ample availability and tons of experience. She charges no fees and assigns no exercises. Her illumination is literal, indisputable, and eternal, lighting the way where Buddhas are born and slayed.

The ninth-century Zen master Chin Lee instructed, “if you meet the Buddha on the road, kill him.” In his essay “Killing the Buddha,” author and neuroscientist Sam Harris examines this surprisingly violent koan, writing, “Like much of Zen teaching, this seems too cute by half, but it makes a valuable point: to turn the Buddha into a religious fetish is to miss the essence of what he taught.”

What he taught, after all, is that we all are born Buddhas. Teachers may aid in this realization, but objectifying gurus just obscures and externalizes what’s only ever found within — and lost again. Each of us must reach this understanding individually and experientially, not intellectually. My saying this doesn’t mean much until you’ve sensed it to be true. So, Lin Chi wasn’t advising actual violence but urging students to be ruthless in their quest for truth and liberation.

In the Zen tradition, you’re as likely to be illuminated by accident as by practice.

No one and nothing can grant freedom. But if they’re old school, like Lin Chi, what gurus can do is beat you with a stick so you’ll stop thinking and intuit the truth. Or, if they’re more modern in their approach, they can gently coax you into practices that enhance intuition and cultivate discipline, like meditation. Or, if they’re enduring, like the moon, they’ll just illuminate whatever path you take.

In the Zen tradition, you’re as likely to be illuminated by accident as by practice. There are countless parables that highlight this fact, like the one about a man who’s instantly enlightened overhearing a butcher telling a choosy customer that every cut on the porker before her is a good one. You get zero spiritual points for avid efforts because there’s no score to keep and no one to impress. There are just experiences and the stories we tell ourselves.

So, please allow me to share a tale of two moons and too much trying, which may amuse you Buddhas.

Once upon a time

Many moons ago, when I was 25, living in Japan teaching English, I rode a bike from the town of Inazawa to the city of Nagoya and back to practice judo. The dojo was all-male and there were no other foreigners, so mostly it was awkward and not that charming. And, often, with my head locked between the knees of a handsome Japanese youth, I wondered what I was doing.

What did all this tumbling, grunting, bowing, and fighting politely have to do with me, born in Israel, raised in the US, and educated by a French mother who prohibited playing soccer to preserve my pretty knees for skirts? What did this have to do with becoming a writer or crafting an adult life (which I gathered was what I should be doing)?

One night, as I was riding despondently back from practice, a one-hour journey that took me along a straight, empty stretch of road surrounded by fields, I noticed the bright moon, round and large. It was right there with me, every time, every ride, always slightly different, waxing or waning, lighter or dimmer, and I realized, laughing happily, “The moon is my friend!”

And something shifted. This moment released me from the vice grip of wishing things were different. I had friends in high places, so everything was already ok. Life didn’t have be some other way… even if I did sometimes find myself with a jock clamping my noggin between his knees.

It was a moment of liberation. In the 22 years since, I’ve turned to texts and teachers to help me cultivate practices to keep in touch with this feeling, or — more precisely — with whatever feelings and experiences arise. I’ve sat in Zen temples, contorted in yoga studies, studied Sufism, pondered Kabbalah, and holed up in a tiny cabin in the woods to read countless books. These efforts have informed me, providing a vocabulary for framing experience, but my most effective lessons have always happened by moonlight, when I finally wasn’t trying.

“The problem is that ego can convert anything to its own use, even spirituality. Ego is constantly attempting to acquire and apply the teachings of spirituality for its own benefit. The teachings are treated as an external thing… which we try to imitate. We do not actually want to identify with or become the teachings.”

In other words, sometimes we reinforce the very things we claim to be seeking to deconstruct with spiritual practice. Delusions. Ego. We’re attached to forms and notions because the substance of Zen isn’t sexy and we kind of wish it was. It’s pretty dull, really, as plain as the light of day or the moon shining at night. It’s as simple as, “Eat your rice. Wash your bowl.”

We all need guidance. But sometimes we use it to hide from instead of find ourselves, accessorizing existence with attractive activities and ideas. We think that a retreat is what we need or a really great teacher or a better routine or even a cool outfit that makes us feel real spiritual (all black, all white, coarse cloth, extra soft?). Students get confused, confounding the finger pointing at the moon — externalities — with the moon itself. We ornament the days with rituals but reject the premise they are built upon; simple brilliance, totally ordinary ordinariness. We resist the very lesson we’re attempting to learn and remain lost as a result.

About five years after befriending the moon in Japan, I served in the Peace Corps in Senegal, where I had a lot of time to stare at the sky. My service took place in Goudem Ndeb, a tiny, destitute village of 43 people—30 of whom were children—deep in the bush, about ten miles from a paved road and the nearest bottle of Coca Cola.

My goal had been to get away from the frantic pace of New York City. So, while I worked at ABC News, among dozens of booming televisions and hundreds of writers and producers, I planned an escape that would take me to a quieter, simpler, more spiritual place, whatever that means. It would be, I imagined, a retreat, and there I’d meditate my way to peace.

The joke was on me. Village life wasn’t quiet. It was loud, stinky, hot, dusty, and uncomfortable. Every night, in my small hut in this place that appears on no maps, I’d light a candle and sit and sweat as bugs paraded across the walls and hyenas howled in the bush. It didn’t feel spiritual. It felt stupid, frankly. Because there I was, with my privileged existential struggle, trying to wrest meaning from life when the meaning of life, clearly, was survival. And I was ill-equipped to survive in this place where nature ruled and the bush ground everything to dust.

My most effective lessons have always happened by moonlight, when I finally wasn’t trying.

I didn’t know where to collect wood for cooking, how to eat at a communal bowl with my hands, ride a horse, catch a fish, sweep a dusty compound with a bundle of sticks, or deal with the stream of kids that followed me like the pied piper. Locals came from far and wide to observe and laugh at my ineptitude which really wasn’t rude because, for one thing, I was a hoot, and also because in a place where a passing car is occasion for celebration, of course the presence of a guest from afar is entertaining.

One afternoon, about six months in, I wandered off to the nearby river to get away. But when the tide changed and I was walking back, I suddenly had no idea how to reach my village. Night fell. It rained. I walked and walked and thought longingly about my squalid hut and the fine, plain, gray, sandy millet couscous that we ate in the evenings, missing the parade of children. I wished I was home. By home, I meant Goudem Ndeb.

Now, you might be saying, as I did then, “What a perfect time to sit under a baobob like a Buddha.” But I was wet and hungry and scared. Mosquitoes were devouring me and hyenas howled nearby. So, after about fifteen minutes of sitting, I decided to walk with a dim moon for company, wondering if I was destined to die young and stupid and full of delusions.

I didn’t know where I was going. I just hoped to find a road that would lead to a village. At dawn, after about ten hours of walking, following the sound of what I thought were barking dogs, I got lucky. Never has a ramshackle collection of thatched huts looked so luxurious!

A woman hanging laundry in her yard screamed when she saw me, a pathetic, pale, soggy apparition. Yet she offered me breakfast, and afterwards her husband walked me to Gouden Ndeb, lecturing the whole way back in Serer (a West African language I didn’t realize I understood so well until his soliloquy made me wince more than each aching step). Rhetorically, he asked with a laugh, “Why wander when everything you need is at home?”

Why, indeed? The depth of his question wasn’t lost on me. It’s what Zen masters have asked in a thousand different ways as students submit to teachers, and memorize sutras, and torture the truth.

When we arrived in the village, there was a whole posse gathered from near and far, mournfully planning hunt strategy—how would they find the lost American? They cheered at my arrival and I fell into the arms of my village mother. We both cried with joy and relief to see each other.

That night, clean, wearing dry clothes, lying happily on woven mats after a dinner of plain millet, surrounded by children, I stared skyward at my friend, the moon, and remembered what it’s always been saying—from dusk to dawn since the dawn of time. Ordinary life is just fine.

In Times of Crisis, Draw Upon the Strength of Peace

In Pursuit of Your Fearless Life – Life Coaches Blog

5 Ways to Save Money When Shopping

The 5 Main Reasons You Should Not EVER Skip Breakfast

In My Grandmother’s Kitchen – Lion’s Roar

admin - April 6, 2022 0
For Simon Van Booy, there’s a special joy in making his grandmother’s recipes. He’s nourishing people with the same love she showed him. Photo by...