“What good is an enlightened being if they turn their back on the world?” asks Sensei Alex Kakuyo. Here, he shares why Buddhists belong in activist protest movements. 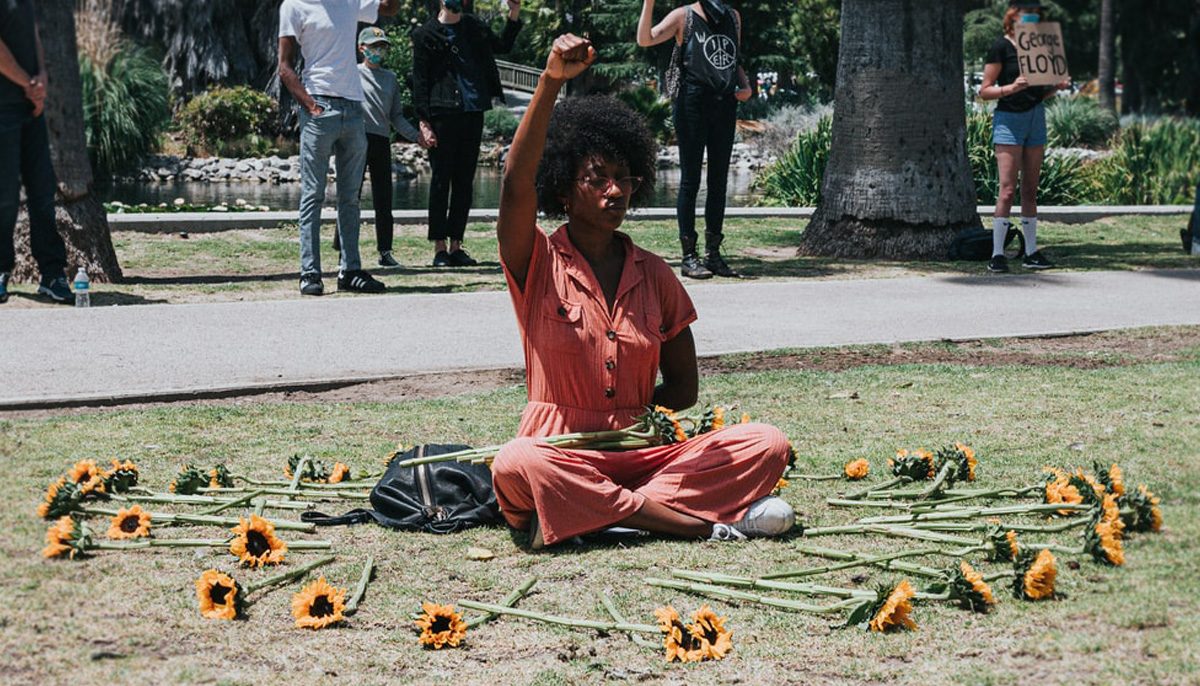 There are many things that draw me to Buddhism. I’ve fallen in love with its traditions, its sacraments, and its practical, life-affirming teachings. But it’s the Buddhist view of humanity that keeps me sitting and chanting in front of my altar each day. The best summation of this view is found in The Nirvana Sutra, which says:

One way of explaining this is that the Buddha expounds a middle path in which all living beings possess buddha-nature but because it is obscured by the defilements, they do not understand it and do not see it. Therefore, you must cultivate whatever expedient means you can to destroy those defilements.

When I read that passage, I’m reminded of the inherent value that people possess. Regardless of their race, religion, or sexuality, all beings are Buddha. And all beings are worthy of protection and care. That said, there is a debate in Buddhist communities regarding how we manifest that protection.

The divide is around the role of nonviolent protests and civil disobedience in Buddhist practice. There are those who believe there’s no place for Buddhists in activist movements; that our time is better spent sitting in our temples.

Would the Buddha sit in a temple and do nothing? No, Buddha would protest, he would mourn, he would go out into the world and try to fix the things that are broken.

And while it’s true that we are called to work on our own enlightenment first, this hands-off approach to life begs the question, “What good is an enlightened being if they turn their back on the world?”

More than that, is a laisse-faire approach to the world’s suffering in-keeping with Buddha Dharma? Is it supported by the example set by the historical Buddha or the buddhas and bodhisattvas that came after him?

To answer this question, we must first determine how Buddha views the living beings of the ten directions.  We find our answer in this conversation between Kasyapa and Buddha in the Nirvana Sutra:

Kasyapa: World-Honored One, the meaning of your explanation that the bodhisattva-mahasattvas should view living beings as their own children is profound but somewhat opaque, for I cannot quite understand it. World-Honored One, [to my understanding] the Tathagata should not tell bodhisattvas to cultivate impartiality toward living beings, regarding them [all] as his children.

Buddha: “But it is so, it is so! I perceive living beings truly as children of mine, like my own son Rahula.”

Thus, Buddha looks upon all beings as his own children. And we [as Buddhists] are called to do the same; caring for our neighbors in the same way that a father cares for his only son.

But how would Buddha respond if his son was killed by a police officer while playing with a toy gun (Tamir Rice, Cleveland, OH)? What would he do if his son spent three years in Rikers prison without being convicted of a crime (Kalief Browder, New York, NY)? What course of action would Buddha take if his son was shot seven times by a police officer while his girlfriend and her daughter were in the car with him? (Philando Castile, Minneapolis, MN)

We’ll never know the answer to these questions, but it’s doubtful that he would sit in a temple and do nothing. No, Buddha would protest, he would mourn, he would go out into the world and try to fix the things that are broken in the same way that he stepped out from under the Bodhi tree 2,600 years ago.

We see his example mirrored in The Vimalakirti Sutra by Vimalakirti, who left a heaven realm so he could provide tutelage to Dharma students here on earth. We see it again in the story in The Three Pureland Sutras of Dharmakara bodhisattva who responded to the defiled nature of this world by building a better one; vowing that anyone who had faith in him could go there. Are we wrong for trying to follow in their footsteps?

Or could it be that nonviolent protest is one of the expedient means that Buddha told us to cultivate; a method for cleansing ourselves and the world of defilements.

A quick look at history shows us that it was civil disobedience that secured the right to vote for women, desegregated schools, and broke the back of Jim Crow in the south. It’s an effective method for ensuring people are protected and cared for.

Thus, the question isn’t if there should be Buddhist protest movements. The question is, “What should those movements look like?”

It would be impossible to detail what every nonviolent protest should look like, however, Buddhism does provide guidelines that ensure acts of civil disobedience are in keeping with Buddhist principles. We see this in The Hundred Dharmas of Vasubandhu, a 4th century Buddhist teacher.

The ones most closely related to protest movements are as follows:

We must never lose sight of the fact that all beings (even if they are on the opposing side of an issue) possess Buddha-nature; that they are deserving of kindness and respect.

We must be energetic and devoted both to our cause and to the maintenance of our own physical/ mental health.

We must act with a mind of charity; not seeking status or financial gain.

Our actions must be rooted in compassion, and a deep love for other people.

We must refrain from acts of physical and verbal violence.

For 2,600 years Buddhists have been working to end suffering for all living beings. In the present age, that work is more important than ever, and civil disobedience provides an effective way for us to take our practice off the cushion and into the world.

The stakes are high, and the work is challenging, but if we hold to the example of the Buddhas and bodhisattvas, if our movements are rooted in the wholesome dharmas of Vasubandhu, we can change this world for the better.

This article was created in collaboration with Buddhist Justice Reporter, who describe themselves as a community of BIPOC dharma practitioners engaged in peaceful resistance to white supremacy and violence.

Boundaries With Kids – Focus on the Family

6 Symptoms You are Getting an Energetic Download and What to Do (by Dr. Dolores Fazzino)

How to Practice Dedicating Merit

Get Out of Debt with These 4 Easy Side Hustles

How Understanding Death Teaches Us To Care – Life Coaches Blog

The Miracle of Everyday Mindfulness

My Standoff for Free Speech on Campus

After Darwin, bizarre ideas emerged about human origins in the North

Cooled, At Peace, Free from Suffering

admin - January 26, 2022 0
Bhante Sujato on nibanna, the state of enlightenment beyond all conditioned existence. The arahants (Sanskrit: arhat) purify their obscurations by following the Buddha’s eightfold path...